Chromosomes within a cell are arranged in sets. Each cell contains 46 chromosomes or 23 sets.
Such sets of chromosomes are classified according to an international nomenclature: from the largest to the smallest, followed by sex-chromosomes.

As you can see, we have:

and so on for all sets.

The first 22 sets are called AUTOSOMES, and are shared by both the male and the female.

Chromosomes in set 23 are called GONOSOMES, or sex-chromosomes. These chromosomes can be X or Y, and constitute different sets depending on whether it is a man or a woman, for, as their name indicates, these chromosomes are concerned with the determination of sex and set the differences between a male and a female.

In other words, it is just ONE SIMPLE CHROMOSOME what makes us SO DIFFERENT from each other.
Always remember that chromosomes are the same in all human races.

And, how is this possible?

Let’s go back a little bit. Every cell always results from the partition of one cell into two daughter cells.
And so, from the moment in which the egg or zygote is formed, it undergoes division, producing two new cells. These, in turn, divide and each of them gives rise to two more cells, and this is successively repeated until the individual is formed.

Given that nature is very wise, depending on whether it wants to keep the number of chromosomes constant or, alternatively, reduce it by one half, it has, at its convenience, two types of cell divisions, which it uses in a very specific and controlled manner. One is mitosis and the other is meiosis.

The difference between both types of cell division lies in the way in which chromosomes are shared, that is the hereditary material at the moment of division.

Thus, in the Mitosis cell division, the two resulting daughter cells always contain the same number of chromosomes as the parent cell from which they derive.

Mitosis is the type of cell division used by the cells in our body, with the exception of cells located in the ovary and the testicles.

Their role is to maintain the number of chromosomes in each cell division constant, enabling us to grow and self-maintain our bodies.

Meiosis is the type of cell division used solely by the cells that make up the ovary and testicle.

Through meiosis, we obtain gametes that the cells in our body use to fertilise and reproduce ourselves. In females, these cells are called ovocytes (ova) and in males they are called spermatozoa.

It is on this type of meiotic cell division (Meiosis) that we will be focusing.

Please note that this is a very, very special type of cell division, and in the entire body, it is only used by germinal cells, that is, by cells located in the ovary in the woman and in the testis in the man.

In other words, cells that are located in the organs involved in reproduction and whose function is to keep our number of chromosomes constant from generation to generation. Otherwise, the number of chromosomes would experience a two-fold increase in each generation, and this would be incompatible with life, endangering the preservation of specie.

And, how is this distribution carried out?

It is very easy. The original cell that contains the 46 chromosomes divides and splits into two new cells. Before they are separated, these two cells share the chromosomes in equal numbers and each of them takes one element from each set of chromosomes.

Because they share the chromosomes between them, each of these two cells only contains 23 chromosomes, or one from each set.

During this process, germinal cells start maturing and changing their form until they become the future gametes or cells with fertilising capacity.

The end result is that each month, the woman generates an ovum that carries the X sex-chromosome, which can be fertilised by any of the millions of spermatozoa that are struggling to enter it, of which 50% carry the X-chromosome and the remaining 50% the Y-chromosome.

A chromosome is a very complex chemical structure composed of proteins and DNA (desoxyribonucleic acid: a compound composed of nitrogenous bases, sugars and phosphates).

When the chromosome is examined at a molecular level, the spatial shape it acquires resembles two strands twisted into a double helix (similar to a ladder suspended into space), where the steps correspond to the bases and the sugars and phosphates to the rail.

There are four organic bases:

GUANINE, CYTOSINE, ADENINE and THYMINE.
The steps of the ladder are always composed of sets of GUANINE and CYTOSINE, or alternatively ADENINE and TYMINE.

The succession of these bases or steps forms a lineal coded message that contains all our recipes and that is decoded inside each cell through specific mechanisms.

The spatial form DNA acquires is similar to a ladder suspended in space. The steps of the ladder are formed by pairs of Guanine and Cytosine, or by Adenine and Thymine. And the rail by sugars and phosphates.

When it is necessary to use any of the recipes at cell level, the two DNA chains separate at this specific point and the gene or recipe is copied from beginning to end. This copy of the gene is called messenger RNA (messenger ribonucleic acid), during this process the Guanine is paired with Cytosine and Adenine instead of pairing with Thymine, does it with a new base called Uracil. Once the process is completed, the DNA closes again and this copy of messenger RNA leaves the nucleus and moves towards the cytoplasm to join the ribosomes. 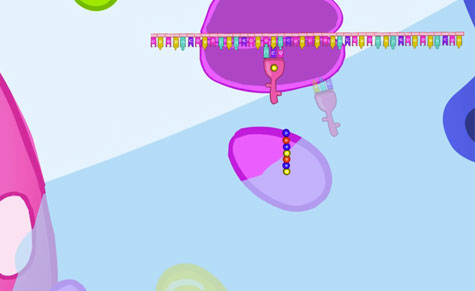 The function of the ribosomes is to read the message, and based on that information, to fabricate the proteins following a strict order. To carry out their function, ribosomes need amino acid transporters known as transfer RNA.
Remember that proteins are formed by chains of amino acids, which play a very important function as they determine how all the molecules (sugars, fats, water, minerals, DNA, etc.) that conform our body must be arranged in order to function. The RNA message is written in a trinary code, that is, a specific amino acid is determined by a sequence of three bases. A codon is thus formed by a set of three bases.
Given that we have four pairs of bases (Guanine, Cytosine, Adenine and Uracil), in total we have 64 possible combinations of codons to recall the 20 amino acids that conform our proteins.

To make things easier, let’s imagine that a chromosome is like a cassette tape, recorded over with cooking recipes one after another.

In our case, the cooking recipes are the instructions for the structures in our body, such as the brain, heart, kidney, etc. to develop and function.

What is the difference between mitosis and meiosis?

Through MITOSIS, we grow and regenerate our body while through MEIOSIS we reproduce.

At the same time and during this process, chromosomes from the same pair exchange information between them.

Now both cells will start cell division and will share their chromosomes in equal parts between their daughter cells.

In the case of MITOSIS, the process ENDS here. If any of these cells needs to divide again, the entire process starts all over again.However, in the case of MEIOSIS, the process CONTINUES and these cells start a new cycle of cell division. But, look carefully, this time the cells start dividing again WITHOUT duplicating their material.
Given that these cells contain duplicated chromosomes, what they do is to share the duplicated chromosomes between their resulting daughter cells.At the end, what we get are cells that only have 23 chromosomes each. This is because the number of chromosomes has been reduced to half and each cell only contain one chromosome from each pair.

What is the difference between male and female meiosis?

Let´s remember that meiosis consists in two successive cell divisions with no duplication of the material.

In male meiosis, both cell divisions are successive whereas in female meiosis they are not successive and each is blocked at an specific point, a blockage that can last years.

The first blockage occurs during the prenatal period, and at the time of birth, all cells that will later on become ova are already blocked at a specific point of first cell division. These cells will start unblocking themselves when puberty starts coinciding each month with ovulation.

At this moment, the first cell division concludes and second one starts, which blocks itself again just after restarting.

To unblock and conclude the process, it is necessary for the cell to be fertilised.

Another difference is the duration time of these divisions. Thus, male meiosis starts at puberty and it is maintained during the entire life of the individual until his death.

On the other hand, female meiosis restarts at puberty and finishes with menopause as the reserve of these cells is finished.

Next topic: What is heredity and how do we acquire it?