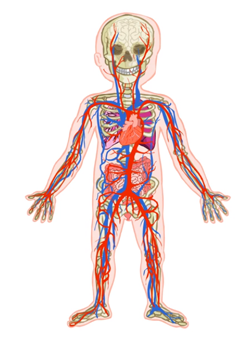 From the moment the egg or zygote is fertilised, it starts to divide, giving rise to new cells, which group together in an orderly fashion to form new organs in our body with specialised functions.

Different sets of organs make up an interrelated “ecosystem” so perfect and incredibly wonderful that it makes it possible for us to live, develop, and adapt to our environments.
So it is then easy for us to figure out that such orderly fashion must be scrupulously directed and controlled.

And this is exactly the case, as all the instructions necessary for the development of the egg are contained in structures known as chromosomes that we all have inside our cells.

Chromosomes are vase-like structures where all the genetic data or necessary instructions are contained for a given individual to develop.
We could say that chromosomes are like our cook books, where all our cooking recipes are stored:

Heart on the way!
A kidney, please!
A stomach coming!

In one word, chromosomes contain our building blocks, that is to say our genetic heritage.

And, how do they do that?

How can our organs be so different if all body cells contain exactly the same instructions?
The answer is easy. They are able to do this through cell specialization.

Let’s see:
In general terms, a cell is very much like an egg, and consisting of three major parts: a nucleus, a cytoplasm, and a cytoplasmatic membrane that encircles it.
For the time being, let’s just focus on the nucleus, as it is in its inner portion where chromosomes are found and which, in the human, total 46.

Given that all cells in our body have developed from one single cell, “the egg or ovum fertilised by one spermatozoon”, all cells are identical, that is, they contain exactly the same instructions. However, depending on the organ they are to be part of, they will use a specific part of that information. This process is known as cell specialization.

And so, since different “recipes” are used, cells will form different organs.

A lung is, thus, different to a stomach because in the lung, the building blocks contained in the “recipes” are designed to form cells that specialise in respiration, whereas, in the stomach, the “recipes” that start operating are designed to form an organ that prepares the ingested food for subsequent absorption in the intestine. And, this process is repeated for each of the different parts that make up our body.

Because of this, every human cell has 46 chromosomes containing all our “cooking recipes” or building blocks. However, these recipes are not expressed at the same time in all cells. Some of these building blocks are expressed and function in certain cells, whereas in other cells, other buildings blocks come into play.